Peter "Pete" Hamilton (July 20, 1942 – March 21, 2017) was an American professional stock car racing driver. He competed in NASCAR for six years, where he won four times in his career (including the 1970 Daytona 500), three times driving for Petty Enterprises. (Wikipedia) 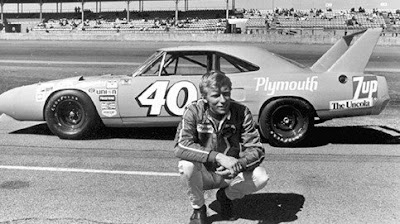 Last week we said goodbye to another part of racing history ... and a big part of the legendary Petty racing team. It was drivers like Pete Hamilton that pushed the limits of their cars and themselves, often being the true driving force behind engineering of the cars we own today. So, a big thank you to  Mr. Hamilton for his contributions as the driver of Petty's #40 wing car, both on and off the track. Cheers.
Posted by MICHAEL IRVINE | Car Art No comments: