June is here, and along with what I consider the official start to the 2010 car show season, is the official release of Michael's latest automotive painting, featuring the 1969 and 1970 Boss 429, entitled "Boss Building." 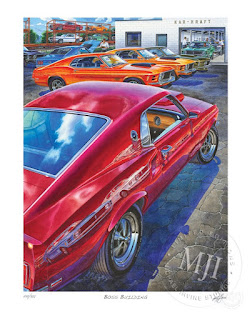 We'll be showing it in person for the first time this weekend at the Fleetwood Country Cruizein in London, Ontario, while simultaneously, showing it at Ford Carlisle! Michael and I will be at Fleetwood, while our friend, Jim McDermott (Mac's Art & Automobile Collectibles), will be setting up on the Carlisle Fairgrounds in our usual spot (H1-HH1). He'll not only have the Limited Edition Prints of "Boss Building," but he'll also be showing one of the Gallery Edition Canvases. If your plans over the weekend, include a trip to Ford Carlisle, stop by and see Jim — tell him we sent you!

Also on-site at the Carlisle Fairgrounds, you can see one of Michael's other Gallery Edition Canvases, on display at the "Mustang Magazine" booth, by the Grandstand. "Mustang Magazine" will be holding a draw, and one lucky winner will walk away with the limited Gallery Edition Canvas of "Big Blocks Behind the Barn." Find out more, by visiting their blog.


Links of interest:
I think it will be a great weekend, no matter what show you attend. With Father's Day just around the corner, what a nice treat to take dad to the car show ... or sneak out yourself, for that special gift! Happy car showing. — Linda
Posted by MICHAEL IRVINE | Car Art No comments:

I just spotted this on YouTube ... very cool. The Wellborn Muscle Car Museum is definitely a must-see stop on any enthusiasts tour of the southern states. It is, quite simply, fabulous! Although I don't think we appear in the video, Michael and I were there back in October of 2009 for the Daytona Superbird Auto Club Reunion. Several of Michael's original watercolor Mopar paintings are on display in the Museum and the Gift Shop now offers Limited Edition Prints of most of Michael's work.

Check out this link to the Legendary Collector Cars website ... there are lots more photos, if you look closely, you'll see Michael's Limited Edition Prints and Gallery Edition Canvases in a couple of them, including the #43 Canvas of "Service Fit For a King"!

If you were there for the pre-Grand Opening, send us some pics or video, I'd love to include them on our blog. Have a great Memorial Day weekend. — Linda
Posted by MICHAEL IRVINE | Car Art No comments:

Muscle cars reached collector status sometime in the early 80s. That's not to say that their value skyrocketed at that time, but enthusiasts were already starting to buy them up and restore them. And, they were collecting, publishing and when the Internet age hit, posting every little thing about them that they could find. There is so much stuff out there, it's amazing - from vintage neon and metal signs, to car manuals, photographs and ads from back in the day. You need only to travel to a swap meet or car show to find lots of treasures. But after a few years, you figure you've seen pretty much all that's out there.  So, that when after all these years, something "new" (that's actually old) crops up, it's pretty amazing. Such is the case with the Randy Hernandez collection of photos.

Michael got his first glimpse of Randy's photos of the Kar Kraft Brighton Michigan Plant in Mustang Magazine a few months ago. Featuring the aerial of the plant in a double-page spread, the images were amazing to see. Turns out, the photos were Randy's dads, Fran Hernandez, who worked at Kar Kraft back in '69. He was the Manufacturing Liaison Manager (the most senior Ford Motor Company employee on-site). 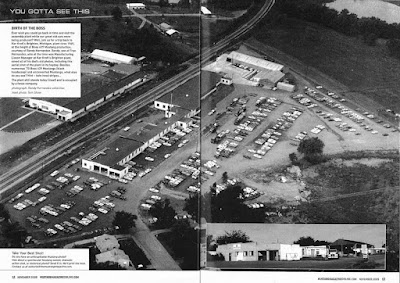 Timing is everything ... especially when it comes to being inspired to paint. Michael had been thinking about a Boss painting for a while. He had just started sketching out some ideas when he saw the magazine layout ... and the rest is history! We contacted Randy and bought a CD from him with over 20 never-before-seen pics - pretty cool! It was that little bit of inspiration that Michael needed. Here's a sneak peek at the final creation - "Boss Building". It'll be released this weekend.

For information on how you can get your hands on these rare photos, contact Randy Hernandez (he's located in Michigan). — Linda
Posted by MICHAEL IRVINE | Car Art No comments:


Magazine Editor Rob Wolf has honored Michael's great Mopar art once again, by putting his newest creation, They Came With The Farm Too, on the cover of the July issue of the Mopar Collectors Guide! These magazines have become quite the collectibles themselves, not only for the great content, but also for the uniqueness of the covers. Many clients go so far as to bring them to car shows and other automotive events in the hopes of Michael being there and having him autograph their copy.

If you're thinking of making the trek, magazine in hand, then just drop us an email to find out if we'll be at the event you plan to attend - we haven't quite nailed down our summer show schedule yet. I can tell you, we'll be at All-Chrysler Carlisle in July to start. We're in Row 'J', just a few steps from the grandstands.

This is the 5th cover of MCG that Michael has been featured on ... a great big thank you to Rob and all the staff at the Mopar Collectors Guide! To add to your collection and get your hands on a back issue, visit MCG on-line. — Linda