It happened again. We're watching "Race to Witch Mountain," and low and behold ... a 1968 Mustang Fastback, just like Steve McQueen drove in the famous car chase classic, "Bullitt." Early in the movie we get a little teaser, by way of a "Bullitt" poster on the hero's motel room wall. It's his dream to one day own one. He even carries a key fob with the running horse on it as a reminder. It's no surprise that at the end of the movie, he gets his wish - driving away in a dark green, 1968 Ford Mustang GT. I think it may have even had all the emblems removed, just like Frank Bullitt's did!

That got me thinking about just how often we've seen muscle cars in movies. Mustangs are popular, maybe because they're billed as "America's favorite pony car," or maybe it's just because they are so recogizable and there are still lots of them around. Most recently, I can think of "Knightrider" (the TV series), "I Am Legend" and "Death Race." I found this site which lists a number of movies both old and new, you may want to check it out: Mustangs in Movies

But it doesn't stop at Mustangs. Mopars show up all over the place as well. In "Death Race," for example, as well as a large assortment of titles over the years. The General Lee from "The Dukes of Hazzard," the 1968 Charger from "Bullitt" and Kowalski's 1970 Dodge Challenger in "Vanishing Point" being three of the most famous, and the list goes on. Here's a link to a list of a few of them: Mopars in Movies, but I'm sure there are lots more.

I haven't found a website about Chevys yet, but Corvettes, Camaros and Trans Ams are always making cameo appearances if not in lead roles. One of my favorites is Burt Reynold's Trans Am in "Smokey and the Bandit." I'll keep you posted.

We're sitting in the dark theater. "Paul Blart Mall Cop" is playing on the big screen. After a somewhat silly and funny start, the movie has taken a softer, more romantic twist. Out of the darkness, I hear "Mustang!" I don't even have to look to see who broke the silence ... it was our 10 year old son. Since he could talk, it's been our family's version of the driving game "punch bug." Everytime someone spots a Ford Mustang, the first one to yell it out is 'king of the hill' - at least until the next time! 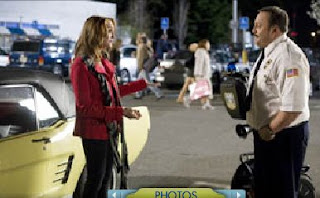 Back to the movie theater: because most of the movie takes place in a shopping mall, we really had no expectation of seeing any cars at all, let alone a blast from the past. So, it was a pleasant surprise as the mildly romantic scene came to a close and we're in the parking lot of the mall, where the object of Paul's affections (Amy) unlocks her 1966 Ford Mustang Convertible. Yellow with a black ragtop, there sits America's favourite pony car! So, the cry of "Mustang" was justified - even expected!!
Along with being able to play almost anywhere; a movie theatre, drive-in, car show, restaurant parking lot ... you get the idea ... there's really no limit as to what cars or how many different makes and models you include. The game can, of course, be altered to fit your own tastes in American muscle cars or sports cars. Although seeing an old Challenger or Charger on the road may be a rare sight, now that Dodge has revived both those cars into modern muscle, your chances are much higher. And, though it's true there is some financial stuff going on with General Motors right now, I haven't heard anything about the door closing on the new Camaro.

All in all, it's fun, easy, free and the whole family can play along. You can even make it more interesting, but awarding a prize (like a Hotwheels car) at the end of the trip, or month, or whatever you choose. In a day and age where kids riding in the back have their eyes glued to their latest hand held video game or movie playing on the dvd player, it gives them a reason to look out the window and enjoy a bit of the countryside. All the while, helping to point out some of the classics we might miss with our eyes on the road!

Plus, it's a great game for the ride to the car show (which as the wife and family of a muscle car enthusiast and automotive artist, we do a lot) .... it gets everyone, including our 8 year old daughter ... involved and primed for the day ahead! On route, the chance of seeing a classic Duster, Dart, Cuda and even the rare Superbird is possible. If you're a Ford fan, why not look for a Bullitt or Saleen Mustang, Shelby, Cougar, Galaxie, Torino or Fairlane. Award bonus points if they can also guess the year of the Pontiac's GTO Judge, Trans Am, Firebird or Chev's Chevelle, Camaro or Nova. It's a fun way to get the next generation interested in the car collector hobby!! May as well get them started young!
Posted by MICHAEL IRVINE | Car Art No comments: