It's hard to believe that March flew by as quickly as it did. It's always a busy month, what with kids home for Spring Break, but this time it seemed even crazier. And now, we're half way into April! Before we know it, summer will be upon us. And with it, the summer car shows.

Our first big show would have been last weekend. We had planned on exhibiting Michael's automotive art at the Charlotte Autofair in North Carolina, however due to my mother's health, we just couldn't make the trip this time round. If you went, I'd love to hear how it was!

What we were able to do, however, was participate in a local event, Car Collector Auction (formerly RM Auction) at the International Centre in Toronto, Ontario. Only an hour's drive from our home in St. Catharines, we could each make the drive back and forth, as needed, over the 3 days. That meant, I could be here for my mom and at the event as well.

Along with the personal stuff, what's been keeping us super busy is the release of the long awaited sequel painting to Michael's incredibly popular, They Came With The Farm, aptly named .... They Came With The Farm Too (as in "as well"). When you see the two paintings next to each other, you realize the second one is actually a continuation of the first scene. It's really quite amazing. 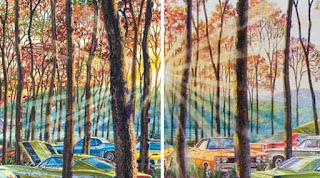 Don't forget that the first one was painted 3 years ago, that's part of what makes it so incredible. Think about it, not only did Michael have to "line up" the scene, because one painting starts where the other ends, but he also had to match the color palette. Now, these are not out-of-the-tube paints ... each one is mixed - kind of like a custom paint job. The colors of every blade of grass, the sky, the sun and the shadows, all have to "match" the original painting.

Next, objects, trees and cars that were "cropped" on the right hand side of They Came With The Farm, have to appear in the second painting. Classic Mopars that were reflected in the body panels of the cars, had to appear in painting. And the cars in the first one, needed to be reflected in the cars in the new one! If that wasn't enough, the paintings had to work as a pair (color, layout), that was the goal, after all, and yet, like the first one, They Came With The Farm Too had to stand alone as well!! 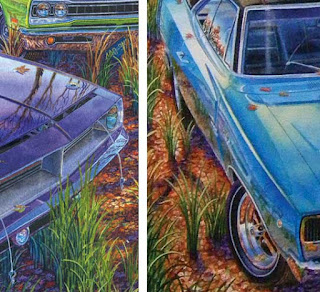 Incredibly challenging and difficult, Michael pulled it off! Whether hung together or separately, this is an amazing collector set. Add to it that we are matching print numbers, and it just doesn't get much better ... although, if there was a third, maybe .... we ARE getting tons of inquiries!

For now, we'll just have to wait and see. Here's to a fabulous Spring! — Linda

February and March were extremely busy months at our little art studio. With over 25% of Michael's new painting, They Came With The Farm Too, being preordered before it was completed, you can imagine how busy we were once it was released! For Michael it was signing, numbering and embossing all the prints as well as the Certificates of Authenticity! Plus, he packs each order himself - that was a lot of tubes. Let's just say, FedEx loves us. For me, just the organization of paperwork and shipping documents alone, was a bit overwhelming.

Most of the first big rush is behind us now, making this weekend kind of a nice "breather" for me. As I prepare Easter lunch today and get ready to make my self-proclaimed, "best Tiramisu in the world," I am reminded that I promised to share this little flavor morsel with anyone who reads my blog!

Now, as you may already know, both my parents have diabetes, but my father, in particular, has an extreme sweet tooth. I am continually trying out new recipes (finding ways of making traditional ones as sugar free as possible), and although many are unsuccessful, this one's a real winner (even with non-diabetic friends). It's rich, decadent, and almost sugar free. I say almost, because although I've tried, I have not yet succeeded in finding sugar-free alcohol or making sugarless lady fingers. For now, I'm using store bought ones. What I do, however, is cut down the number of ladyfingers. My dad says the best part is the filling, anyway.

So, here goes. I hope you enjoy it. By the way, you may want to keep this little number a secret ... it's not as hard to make as people let on. Whenever I make this Tiramisu, I am always reminded of the Kellogg's Rice Krispie commercial where the mom dusts herself with flour to make it look like she's slaved over the squares!

Add Mascarpone and beat another 3 - 5 minutes until smooth.

In another bowl beat 6 egg whites and a pinch of Splenda until forms stiff peaks. Gently fold into Mascarpone mixture.

Pour the coffee and remaining tbsp coffee liqueur into flat dish, dip one side of each ladyfinger and layer the bottom of a large, clear serving dish (I use a trifle bowl) with 6-7 ladyfingers. Unlike a traditional recipe, the fingers don't need to touch, since we are using less. I often break them in half before dipping - that way I can spread them out more on each layer.

Cover the ladyfingers with 1/3 of Mascarpone mixture and sprinkle with cocoa. I use a flour sifter, it makes for a nice even dusting. Alternately, you can use a small mess strainer. I use a fairly liberal dusting on the "in-between" layers, a lighter one on the top.

Continue layering and finish with a Mascarpone mixture layer, dusted with cocoa.

Refrigerate for at least an 1 hour before serving. If you can leave it overnight, it's even better!

I scoop my Tiramisu into dessert bowls and top with whipped cream (which according to my dad, makes everything better). It's not "pretty" but I'm more about taste than presentation! The dessert does look fabulous in the serving bowl, however, so you may want to "show it off" before scooping/serving. You may have seen photos where the Tiramisu is cut into pretty squares. Because we use less ladyfingers, my version is not as stiff. The ladyfingers absorb some of the moisture, making other recipes more "rigid."

From our family to yours, have a wonderful Easter weekend. Enjoy the food, no matter what you have, but especially the company of family and friends. See you soon. — Linda
Posted by MICHAEL IRVINE | Car Art No comments: